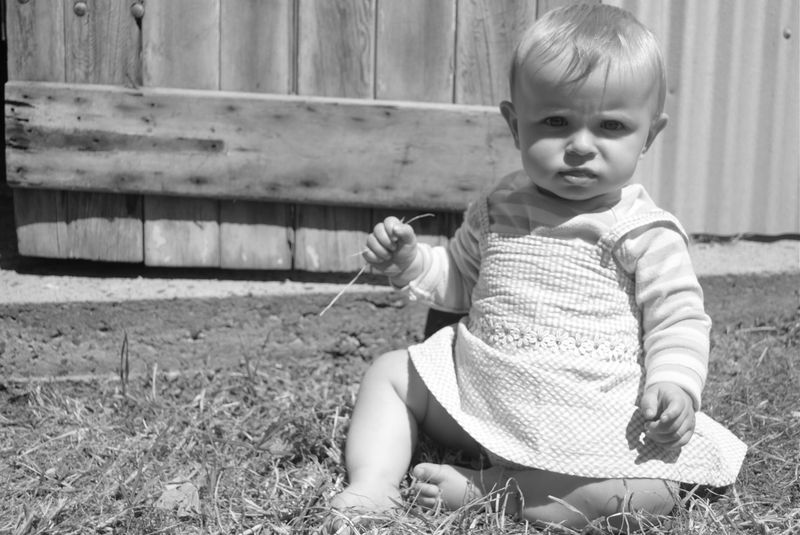 Today was the day I was going to get stuff done. Tilly was at preschool, I had a list, I was all over it.

It's like I've never had an eight month old. Who has just learnt to crawl. Who managed to crawl across the kitchen in a second and get her fingers jammed under the ironing board. (Which was up because I was really hoping to sew and press at least one seam, just one, in a little dress that's been sitting waiting. Didn't happen.)

The lawn mowing man didn't show up. And the grass grows quick here. And the big black snake was sighted at the front step yesterday. Awesome.

Somehow I ended up on hold to Telstra for an hour. I should've hung up. I made Ivy lunch, cajoled her into eating it, made a small dent on the chaotic kitchen and read the school bulletin. Then after sixty two minutes and I was dead sick of carrying the phone between ear and shoulder, they disconnected me. I shook the phone. I said 'Hello? Hello?'. I stared at it in disbelief. Nothing.

I wish I could poke them with a stick. Stupid telco.

Shortly afterwards, Ivy dramatically threw up. She seemed fine, as they do, and I was totally horrified to think it might have been the result of her picking up bit of grated cheese from last night's dinner off the floor. Wee little floor sucker. (I really REALLY need to get my floor cleaning in order.)

Some days I can just swing on the 'nothing's working' creaky gate.

Some days, I get really frustrated.

This afternoon after school and preschool though, we went visiting. Which for us has the wonderful effect of changing the land at the top of the Faraway Tree. We go out, we chat, we play, we come home to a new environment. The kitchen was still a mess but the hastily thrown-together casserole was now slow cooked, smelling delicious and ready, and bathtime, storytime, bedtime has its own momentum.