Menu
what a Saturday

I took my little biscuit company to my first market on Saturday. And it was AWESOME.

SO much fun. I've never thought about myself as a salesperson, and I still don't think I am. But damn I sold some biscuits!

I sold out of the most popular bikkies by about 10.30am and brought home a mere 12 bags. Very relieved about that. I wasn't sure if I'd be able to sell two.

Here's a not-very-good shot of us (no offense Dad): 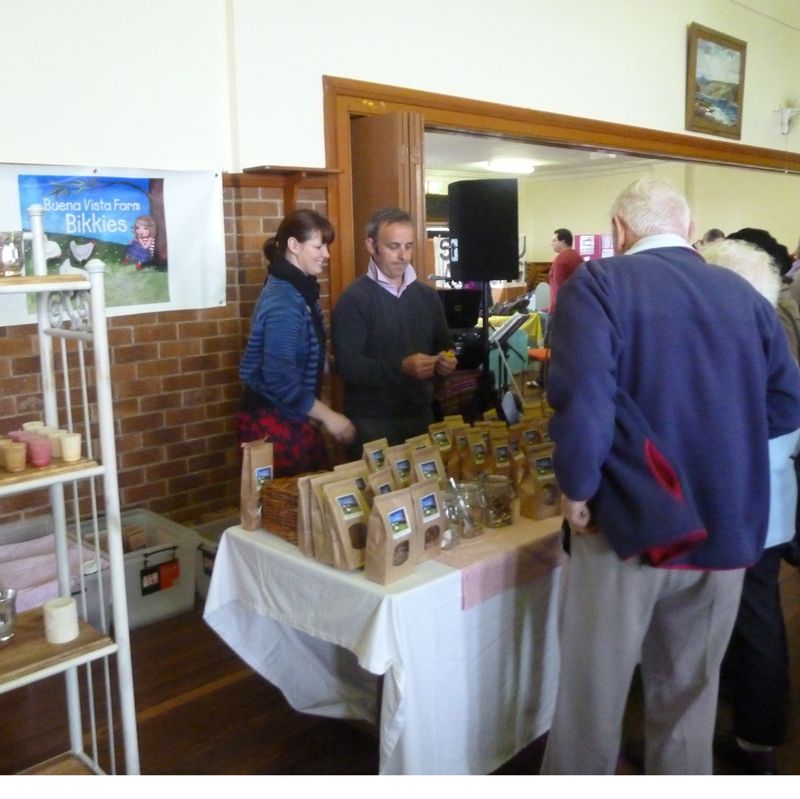 Sample jars at the front. An old dude diving for his wallet. My double chin (what was I THINKING? I should be making organic sugar-free muesli. Am such an idiot.) Also Adam, holding a gluestick, pasting on my ingredients labels onto the backs of the bags as we go. I am so organised and professional, it's devastating.

Somebody placed a bulk order the day before to be delivered at the market. It was a reasonable sized one and I wasn't back in the catering kitchen in time so had biscuits spread all over my kitchen counter on Friday night. I was heat sealing bags, labelling, and putting in tray after tray of biscuits when we had a blackout. I thought I'd caused it.

Adam ducked outside to see if our nearest neighbours were in darkness and in that two minutes Ivy managed to fall into one of Henry's plastic toy boxes and injure herself and Tilly skidded on an aluminum drink bottle left lying on the floor. Adam returned and confirmed the whole street was out.

After patching up the baby and lighting a bunch of candles, he went into town to get burgers for dinner, awesome man, and I tried not to think about all the things I left to the very last minute.

I called my parents and confirmed the other side of town wasn't in darkness, so Mum's oven was my backup plan.

After burgers by candlelight and early bedtime for the smallies, the lights mercifully came back on. Gave me a dreadful fright.

The biscuits in the oven were even cooked. I had, however, left quite a lot of things to the last minute. And so finally went to bed after 2am, with bikkies packed, sealed and ready (without ingredients labels) and set the alarm for 5.30am. (I'm giving you the detail for a reason. Bear with me. The three hours sleep is significant.)

It was a rainy morning and I was glad to be an inside stallholder (we are hoping to get a marquee and have an outside spot in Kiama next month.) We worked very hard, we talked and sampled and sold all our stock. And it was so much fun, I adored it.

Mum minded the kids, Tilly went off to a birthday party, we all got home at lunchtime and flopped around on the couches. The kids had their computer time (which they do together.)

'Cept after half an hour I remembered that I'd told Tilly I'd put on a DVD for her and I hadn't done it. I went round the corner into the study to ask if she wanted one on, and she wasn't with Henry. He said she'd gone out the gate. She would have had to go past Adam and I on the couches to do that. We looked in her bedroom thinking she had put herself to bed, she's been on medicine for an ear infection which makes her sleepy. Not there. Not in our bed. Not anywhere.

We went outside. Not on the trampoline or in the garden. Not in the chookyard. Not next door with our neighbours. Not anywhere.

Adam got in the car and drove up the road. Drove up to our friend's house at the very top of the road in case she'd gone for a visit, she has done that once before. No sign.

He came back and searched the house again while I took the car and drove down the road to our other neighbour. Not anywhere. By now I was starting to panic, I'll be honest. I realised with a sinking heart we had not seen her for about 45 minutes. Neighbours up and down the road were out looking for her. I went down to the nearest dairy on our road which she'd recently asked if she could visit. Not there.

I came back and Adam got back in the car to go and check the river that runs under the road. Another neighbour was checking the dam nearest our house. It was at that point the bottom of my heart fell out. Panic set in, I won't lie, and I madly checked the house again. Just as Adam had, under every bed, under every couch, in every cupboard, the linen press, the pantry, it's not a big house. Not there.

My lovely lovely next door neighbour had both Ivy and Henry and I called Dad, as I always do in a crisis, and asked them to come.

Five minutes later, as Mum and Dad pulled into the driveway, Tilly appeared on the verandah with a sleepy face.

She looked at the people and asked us what we were doing.

She'd been asleep in the house. On the couch. The one I had been sitting on (it's only a two-seater.) She had been underneath a big pile of pillows and cushions and blankets.

I called Adam immediately who tracked up and down the road to make sure everyone knew we'd found her.

Really, had she not heard me hysterically crying through the house, hoping to find her under a bed and not drowned in the dam?

She really hadn't. There was no tricking or hiding. The kid had been asleep next to me, I hadn't seen her get under the pile of cushions and it's a miracle she didn't suffocate. Also a miracle that neither Adam or I had a heart attack.

Worst hour of my life. Without doubt.

Can I say though: I adore this road. I adore these people. I cannot imagine a better place to live.

Our nearest neighbours hosted a pizza movie night that night, we had a lovely bottle of wine, the kids had a spontaneous disco, and we thanked our lucky stars.

Hope your Saturday had more of the ups and less of the downs?